Since 2012, EkoNiva-Chernozemye has been annually holding a large-scale event called Fashion Farmer. It has become a traditional festival which brings together partners, colleagues and friends and gives them the opportunity to discover cutting-edge solutions for the agricultural sector and technological innovations, as well as to discuss topical issues. On 31 May, over 400 guests gathered in Dobrino village, Voronezh oblast, to take part in the event which marked EkoNiva’s 25th anniversary. 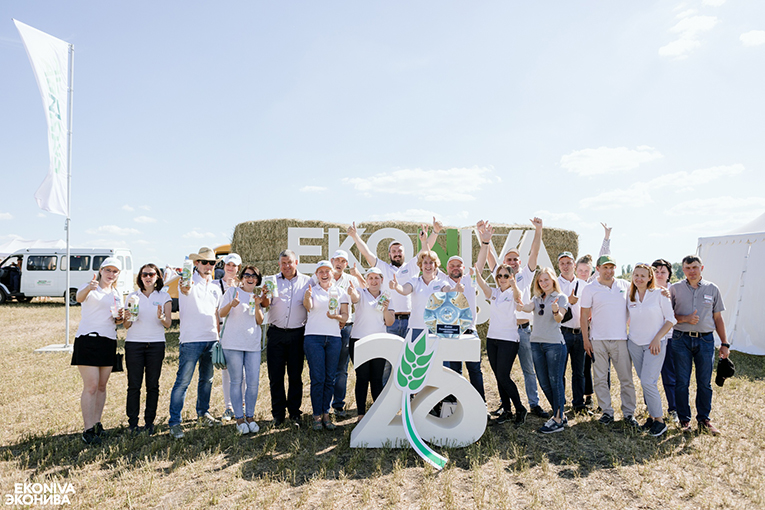 The event featured 65 units of equipment of the world's leading brands — John Deere, JCB, Vaderstad, Pottinger, Fliegl, Gregoire Besson, Monosem, Roc, and Haybuster. The specialists of EkoNiva-Chernozemye provided the guests with a detailed insight into the technical characteristics of the exhibited machines which were also shown in operation.

The headliner of the machinery parade was John Deere presenting a wide range of farm solutions to the guests: tractors from Series 6 to 9, grain and forage combine harvesters, seed drills, balers, trailed and self-propelled sprayers, ploughs, harrows and so forth.

The John Deere DB55 planter with the Exact Emerge row units stood out from the rest of the novelties due to its unique combination of high-speed sowing (16 km/h), unrivalled uniformity and quality of seeding (more than 99%). 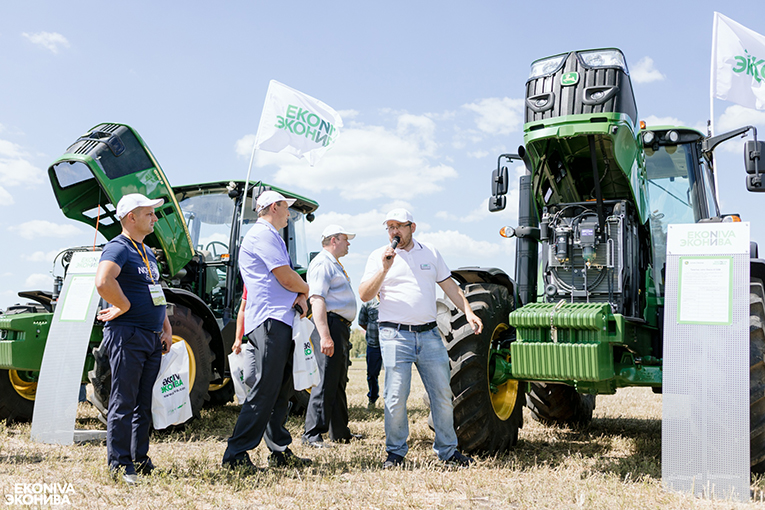 The operation of the new John Deere R4040i self-propelled sprayer was demonstrated in autopilot mode, without the operator. Two centrifugal pumps with the capacity of 1,000 l/min and 1,200 l/min are designed both for application of liquid fertilisers and treatment with crop protection agents. The tank capacity of 4,000 litres increases the performance and reduces the number of refills. The John Deere R4040i sprayer is successfully used in precision farming for variable rate application of the working solution.

Two new models of tractors were presented as well — the John Deere 6195M, which replaced the well-proven machines of Series 7, and the John Deere 8245R, which became a worthy representative of Series 8. The operating characteristics of the latter model had already been appreciated by many farmers.

‘Thanks to EkoNiva-Chernozemye, we have reliable and high-quality machines at our enterprise’, says Maksim Trineyev, Manager of Chernozyom farming enterprise, Voronezh oblast. ‘We are especially pleased with the four John Deere 8 Series tractors that we have in our fleet. Once you start using such a tractor, you realise it is worth many times the sale price.’ 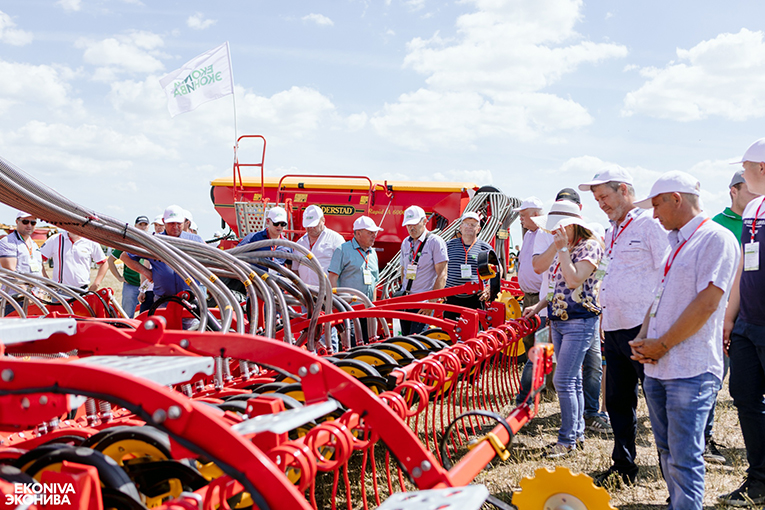 As for Vaderstad machinery, it can be described in four words: reliability, versatility, speed and accuracy. Fashion Farmer presented a wide range of developments of the Swedish brand, including the Tempo TPF 16 seed drill.

‘The machine has set a world record by planting 502 hectares of land in 24 hours’, says Roman Logunov, Sales Representative of EkoNiva-Chernozemye. ‘When operating at 20 km/h, the sowing quality is 98-99%. The Tempo TPF 16 seed drill is equipped with the PowerShoot technology — the so called ‘pneumatic shot’ – in which excess pressure is used instead of vacuum to mitigate the vibration and achieve precise sowing at a high speed.’

Since EkoNiva-Chernozemye has been supplying JCB machinery to the domestic market for 12 years already, it was only natural that the British marvels occupied their rightful place in the parade. The new JCB 560-80 Agri telescopic handler received special attention. The unique features of the model are the lift capacity of 6 tonnes, the boom radius of 8 metres, the bucket capacity of 5 cubic metres, as well as the boom stabilisation system. The machine is one of the most versatile, efficient and at the same time cost-effective in its segment.

‘We have been cooperating with EkoNiva-Chernozemye for some ten years’, says Nikolay Skoba, Engineer of Rusagro Group. ‘We have no doubt that JCB telescopic handlers are the best choice. The 531-70 Agri models operate at our farm coping with heavy workloads perfectly. But the enterprise is developing, and we know where to go as soon as there is a need to buy new machines for the fleet.’ 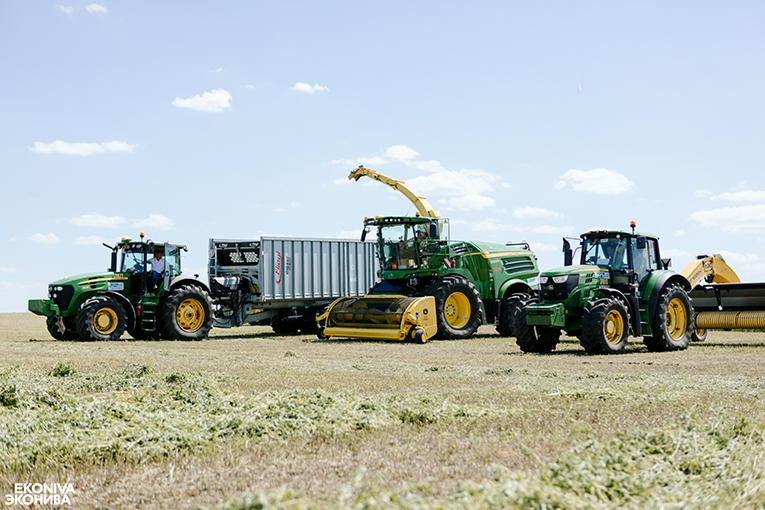 The machinery of such manufacturers as John Deere, Pottinger, Fliegl, Roc and Haybuster was showcased at the hay and forage preparation site.

The precision farming site also sparked a great interest among the participants of the event.

‘We are actively developing precision farming now’, says Ivan Vorobyov, Executive Director of EkoNiva-Chernozemye. ‘To be more exact, we are testing the latest developments in the fields of EkoNivaAgro-Left Bank Operation on the area of 4,000 ha. Using satellite data and various sensors, our specialists have already prepared both yield maps and prescription maps. This year, we have carried out an experiment on integrated sowing and integrated fertiliser application with using the prescription maps for the first time. In Russia, no enterprise has had a similar experience on such a vast area yet. At the end of the year, we plan to test a programme together with John Deere which will allow us to combine all the parameters of precision farming — both technical and agronomic — into a single data array and upload them to 1C. This will be another breakthrough!’

EkoNiva’s long-time partners and colleagues, those who witnessed the growth of the company, visited the festival to meet their friends. 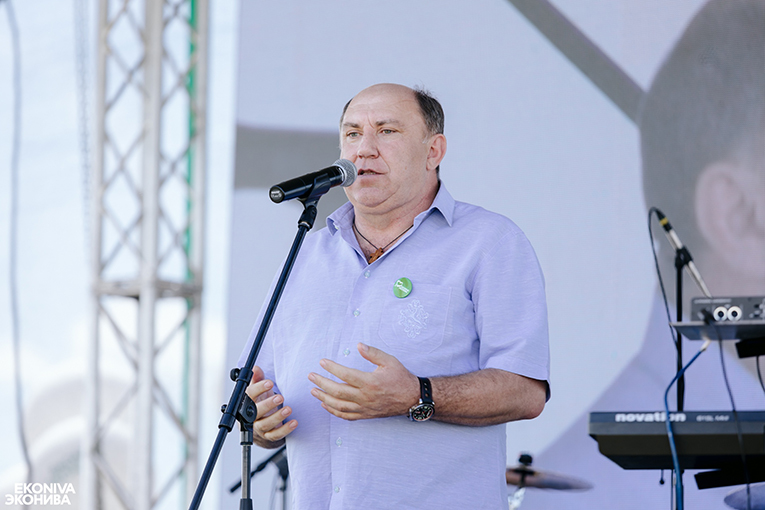 ‘I believe that the company will see many years of further development and prosperity’, says Aleksandr Rybenko, Regional Director of EkoNivaAgro in Voronezh oblast. ‘EkoNiva has contributed largely the revival of agriculture in our region. Today we can see state-of-the-art and reliable machinery working in green fields. And I am sure that the company will achieve even more impressive results.’

Bjorne Drechsler, Deputy General Director of EkoNiva-Tekhnika, is convinced that everyone will get valuable insights from this festival.

‘We are always happy to help anyone who wants to develop their business and make more profit in the agricultural sector.’ 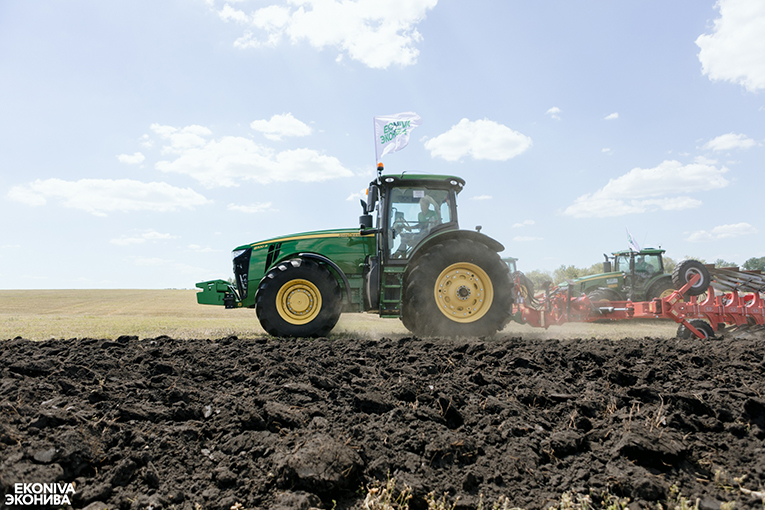 The head of the Russian branch of John Deere Corporation Sergey Didenko noted that Fashion Farmer creates a great opportunity to be tuned in to the latest innovations and share experience.

EkoNiva’s old friend and partner Philip Westman, Sales Manager of Vaderstad subsidiaries, also visited the event. The history of relations with the Swedish manufacturer began in 2002, and the first machine, the Rapid combined seed drill, was delivered to Russia soon after.

‘It’s a pleasure to see what success EkoNiva has achieved for 25 years of its work’, shares Philip Westman. ‘The company has contributed enormously to the development of agriculture in general and propelled our partnership relations to a whole new level. This year, we have record-breaking sales again!’ 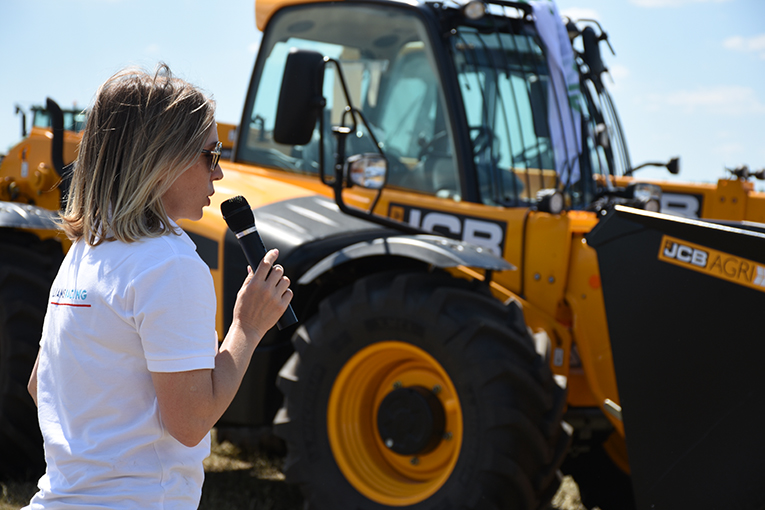 ‘A dealer is considered to be a mediator between a manufacturer and a user of the machinery’, says Svetlana Petrova, Deputy General Director of JCB Russia. ‘But I wouldn’t say the same about our partnership, since EkoNiva rather unites us. We do greatly appreciate the company’s commitment to create such warm business relations, its openness and ability to hold a constructive dialogue. All of this is essential for discussing the needs and problems of farmers and working out effective solutions together.’

Another participant of the festival, EkoNiva-Semena, showcased a wide range of its products – seeds of peas, soybeans, winter and spring wheat, oats, lentils of the highest quality. The enterprise’s in-house laboratory confirmed that all the presented seeds complied with the quality control requirements. 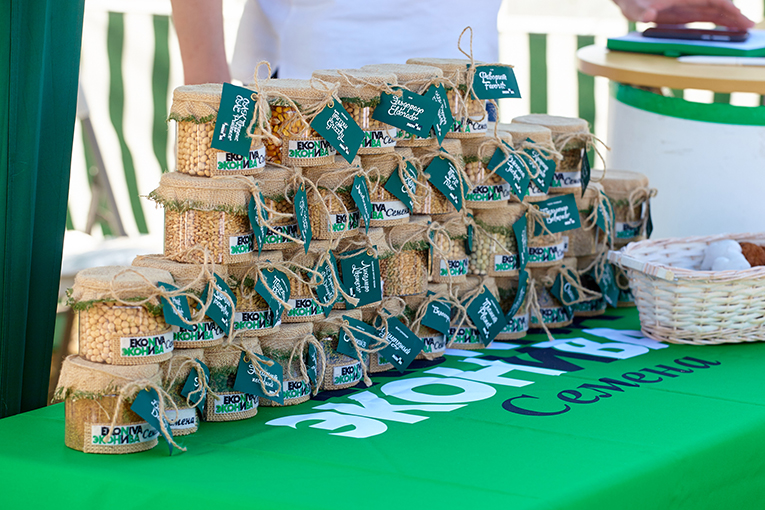 ‘Today we have the chance to present our own two varieties of winter wheat – Cepheus and Sheratan – bred by our specialists with regard to the climate of the Central Region of Russia’, says Aleksandr Ryabenko, Sales Representative of EkoNiva-Semena. 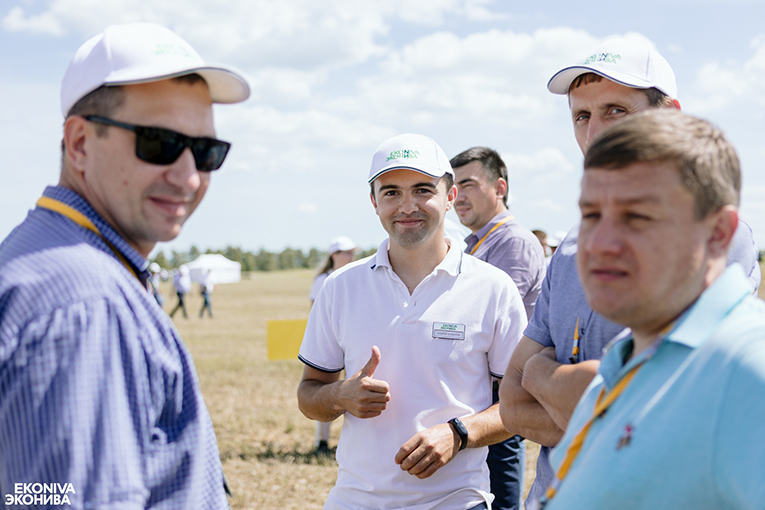 The guests of the event really appreciated the booth of EkoNiva-Semena.

‘Voronezh oblast is very large, with varying amount of precipitation and nature of the soil. That is why the choice of seeds needs to be taken very seriously’, says Vladimir Popov, Director of Merkuriy farming enterprise, Verkhnyaya Khava district. ‘EkoNiva offers an excellent range of seeds and helps to select the best cultivars taking into account the enterprise’s specific requirements. We have chosen the Lgovskaya 4 and Skipetr winter wheat varieties, as they crop well in our fields.’ 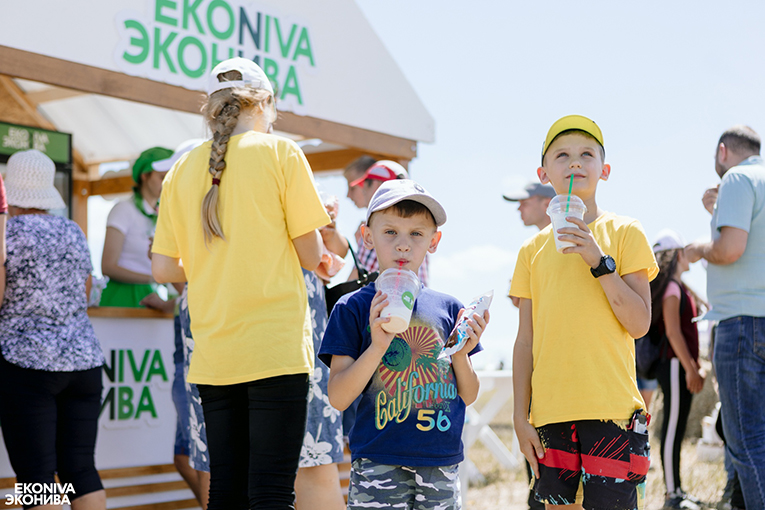 EkoNiva-Food created a jolly mood by arranging a refreshment stand with cool milk, ice cream, yoghurts, and milkshakes which the guests tasted with pleasure on such a hot day.

‘It turns out that EkoNiva is not only a supplier of farm machinery, but also a producer of delicious dairy foods’, says Sergey Glaznyov, Deputy Manager of Agro-AK, Voronezh oblast. ‘I just can’t get enough of the natural milk, and the taste of the ice cream reminds me of my childhood.’

The day was full of warm memories, vivid emotions and ambitious plans for the future. We congratulate EkoNiva on another significant event and look forward to new victories!